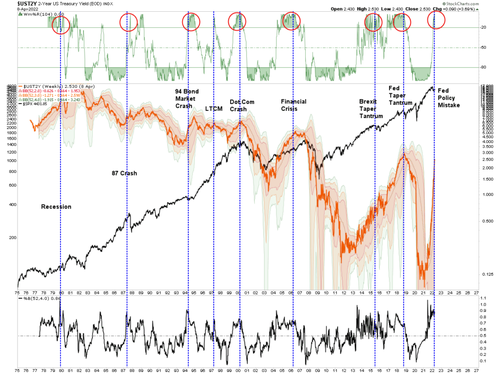 From Zerohedge.com:  “As shown above, the surge in 2-year bond yields is unprecedented. Historically, such a surge in short-term yields coincides with either recessions or market events. With yields now 4-standard deviations above their 52-week moving average, such has traditionally denoted peaks in yields previously.” 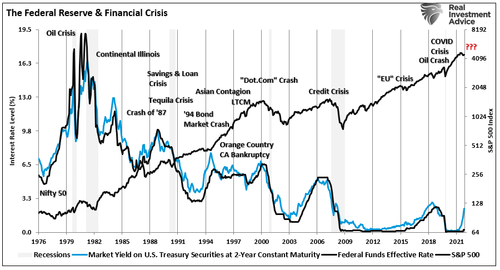 More:  The importance of these two charts should not be quickly dismissed.

The Federal Reserve has only just begun its rate hiking campaign to tighten monetary policy. However, the bond market is already rapidly tightening policy which will slow consumption through higher borrowing costs. As noted previously:

“People don’t buy houses or cars. They buy payments. Payments are a function of interest rates, and when interest rates rise, loan activity falls as payments rise above affordability. In an economy where 70% of Americans have little savings, higher payments significantly impact family budgets. Such is a critical point. Higher interest rates create “demand destruction.”

Read the whole thing:  Bull Market In Bonds Set To Return With A Vengeance | ZeroHedge