A Massive Tax Cut, For the Rich 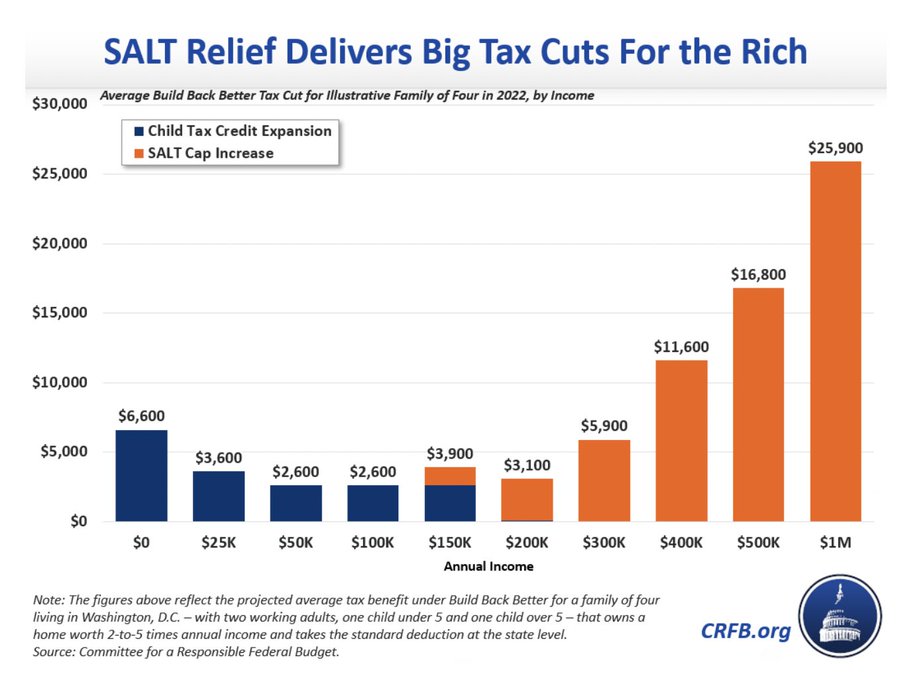 The lede:  House Democrats just passed President Biden’s multi-trillion-dollar “Build Back Better” spending agenda. They’re pitching it as a historic investment in the middle and working class. So why is its second-largest provision a tax cut for the rich?

That’s right: The latest version of the Build Back Better plan includes $125 billion for healthcare subsidies and $130 billion to expand the child tax credit—yet it allocates $280 billion to fund tax relief for wealthy residents of blue states. The only item bigger than this tax relief for the rich is the funding for pre-k and childcare, which comes in at $390 billion.

At question is something called the state and local tax deduction, or SALT, for short. It essentially gives residents of high-tax (read: blue) states a discount on their fair share of federal taxes. The GOP limited the deduction as a part of its 2017 tax reform, and now the Democrats are trying to expand it again via Build Back Better.

More:  The Democrats are attempting to spin this as “middle class tax relief,” but it actually almost exclusively benefits the rich. As the Washington Post explains, “Over the next five years, raising the SALT cap would provide a tax cut only to those who itemize their taxes and pay more than $10,000 in state and local taxes—a group overwhelmingly made up of the wealthy.”

According to the liberal-leaning Tax Policy Center, Americans in the bottom 40 percent of income-earners receive literally zero benefit from this change, while almost all of the benefit accrues to those earning more than $250,000 annually.

Yet what makes this Democratic hypocrisy so sinister is that, as written, the plan currently cuts taxes for the rich while burdening millions working-and-middle class Americans with new taxes. President Biden repeatedly promised not to raise taxes on anyone earning less than $400,000. But the Build Back Better plan nonetheless includes billions in new taxes, such as increased taxes on nicotine products, hitting smokers—a group that’s disproportionately poor and racially diverse.

Build Back Better will ultimately result in 20 to 30 percent of middle-class households seeing a tax increase, according to the Tax Policy Center.

There’s simply no escaping the fact that the Democrats’ Build Back Better plan cuts taxes for the rich, burdens working Americans with new taxes, and betrays all their promises. But what makes matters even worse is their openly cynical motivation for this betrayal. Democrats are apparently okay with tax cuts for the rich when it’s rich constituents from their home states. The SALT tax relief overwhelmingly flows to residents of blue states, where taxes tend to be higher. Democratic legislators are compromising their purported principles in pursuit of political patronage and corrupt clientelism.